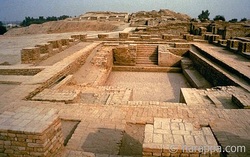 The "Great Bath" in Mohenjo-Daro.
Mohenjo-Daro had the first public water tank in the ancient world known as the "Great Bath". Many scholars believe that the water in this tank was used for religious functions to purify or renew the well being of the bathers while some say it was just used for hygienic purposes. The tank measured about 12 meters long, 7 meter wide, and the maximum depth was 2.4 meters. The tank was watertight because of the finely fitted bricks it was made with and to ensure that there was no leaks, they applied a thick layer of natural tar around the sides, also known as bitumen. There was a series of rooms located on the western edge of the tank. In one room there was a well that they believe could have supplied some of the water for the well along with rainwater because there has been no inlet drains found.